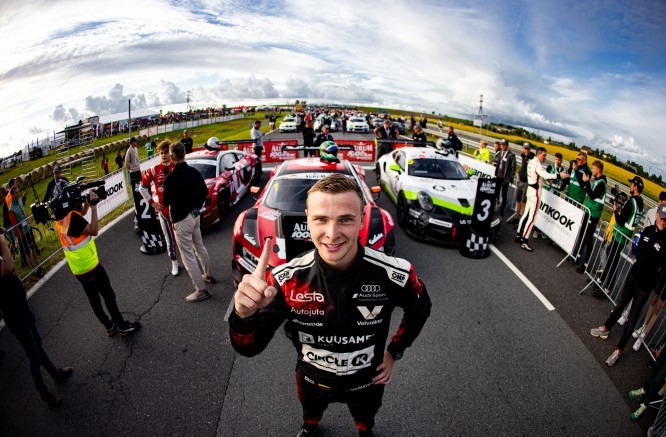 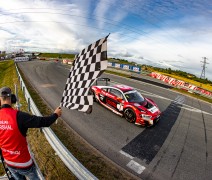 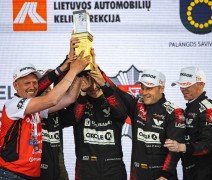 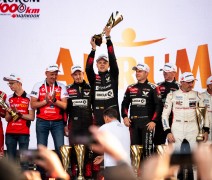 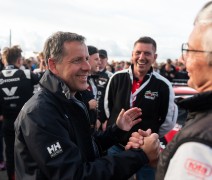 On Saturday evening, the spectators watching the "Aurum 1006 km powered by Hankook" race gave a round of applause to Julius Adomavičius of "Circle K - Lesta Racing Team," the first driver to cross the finish line.

Julius was recognised as a true champion, and his teammates Marijus Mazuckas, Eimantas Navikauskas, and Ignas Gelžinis, were delighted not only with the transition cup but also with a whole series of extraordinary records achieved.

The winners were the first to be congratulated by their teammates and fans, the race's main organiser Darius Jonušis and the competitors.

Second place in a very tough fight went to the "Circle K MylesPlus Racing Team" Oskaras Brazaitis, Paul August, and brothers Ralf and Paul Aron’s from Estonia, who were also driving Audi R8 LMS, and who were just 26.726 seconds behind the winners over the 1006 km distance. The team's car was driven to the winning finish by eighteen-year-old Paul Aron.

The runners-up in the overall standings also finished second in the GT3 class.

Winners of the third place lost to the second prize winners by just 0.211 seconds. But they celebrated their victory in the GTO class.

Fourth and second places in the GTO class went to the "Porsche Baltic GT3" team, with Robertas Kupčikas, Tautvydas Rudokas and Rokas Kvaraciejus driving the "Porsche 911 GT3 Cup", one lap or 2 minutes and 01.792 sec behind the winners.

Fifth and third in the GTO class was "Ignera Bio-Circle by Dinamit's" Mantas Matukaitis, Aivaras Pyragius, Karolis Gedgaudas, and Rokas Steponavičius in a "Lamborghini Huracan Super Trofeo Evo," who were five laps behind the winners. (5 min. 37,783 sec.)

Sixth in the overall standings and fourth in the GTO class, 12 minutes and 26.082 sec. behind the winners was won by "Gera dovana-Šiauliai By RD Sings" drivers Audrius Butkevičius, Arturs Batraks, and Paulius Paškevičius driving "Lamborghini Huracan Super Trofeo."

The weather was kind to the racers

On Saturday, the riders competed on a dry track, with the thermometer rising to 20 degrees midday.

Perhaps the best result of the favourable circumstances was that with precisely 100 laps, Adomavičius set a track record time of 1 minute and 7,126 sec. for one lap.