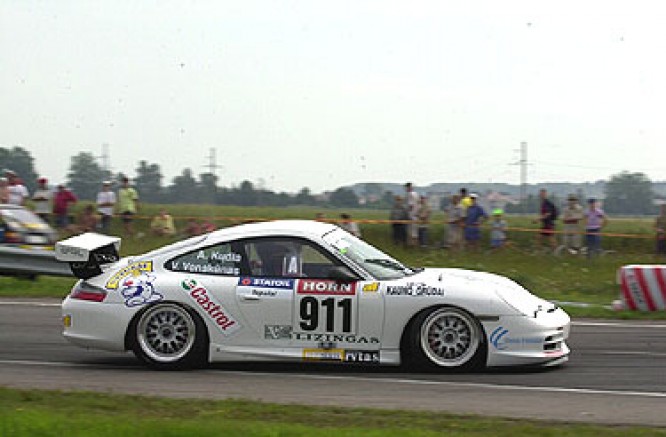 In 2003 there was the 4th race in Palanga called “Horn Grand Prix 1003 km race“. The race was similar to the one in 2001 as the winners were once again the strongest team with Vytautas Venckūnas and Alfredas Kudla driving “Porsche Carrera GT3“. After this victory, V. Venskūnas was the first Lithuanian sportsman winning 3 times in a row in Palanga race.

Misfortune for the rivals

2003 and 2001 race identical only the end, the scenario was different like black and white.
The rival team “Los Patrankos“ driving “Audi RS4“ was determined to win and the effort was really seen, nevertheless, on 266 laps the same misfortune happened as the previous year – the turbine has failed.

Other teams were trying hard to lessen the lap deficit, however, it was not that simple and the winners were clear.

Women in the racing world

The Lithuanian TV host has participated in the race and was remembered long after. With other team members, they got 14th place in the overall scoreboard.

Remembering events that took place 15 years ago, Nomeda states that it was really a pleasure to participate and the atmosphere was far more incredible than prizes. The friendships of team members and passion for Autosport is not gone. The team experienced an unfortunate accident, however, the determination lead the car to the finish line.

The third place winners were really happy with the victory and still remembers wise words from others just before the race.

It is no surprise that each year attracted more and more people from tv, music, business or political world. Many people remember 2003 when one of the politicians gave out prizes – caricatures with dedications to each driver. The main organizer, Darius Jonušis, remembers the year 2003 as many new experiences race event. Not only from the driving world or original prizes, for the first time there was an international team of a Dane and Lithuanian. As well as French bakery that was in race territory organized French kiss contest. There were many more events for the spectators as well and the first Mis was chosen.